As the COVID-19 epidemic continues on, many observers have noted it acts as an “accelerant” for changes in certain behaviors that likely would have happened anyway – eventually. Grocery shopping is one area where this may have happened, as the sudden shock of restrictions led many shoppers to change both where and how they shopped. And based on insights from our latest Shopper Army community weekly survey, many of these shoppers expect the changes to endure – which has significant implications for CPG marketers.

According to our recent poll, 65% of our community are doing at least some of their grocery shopping online, and 22% of them are doing the majority of it online. And of this “majority” group, ½ expect to continue doing the majority of their shopping online once the pandemic is over and all restrictions are lifted. This is one of many signs that the shift towards online will continue to evolve.

There have been a lot of changes in where people shop. We’ve particularly seen a rise in “conventional grocery stores”, which 46% of our shoppers indicating they are buying more of their groceries there than they were 6 months ago. This is very significant given this format has been facing downward pressure for years. “Mass merchants/ big box stores” were cited by 40%, while discount grocery stores were chosen by only 25%. And of the shoppers that have changed their behavior, again about ½ expect the change to endure once the pandemic is over.

Figure 1. Which types of stores shoppers are buying more of their groceries from vs. 6 months ago 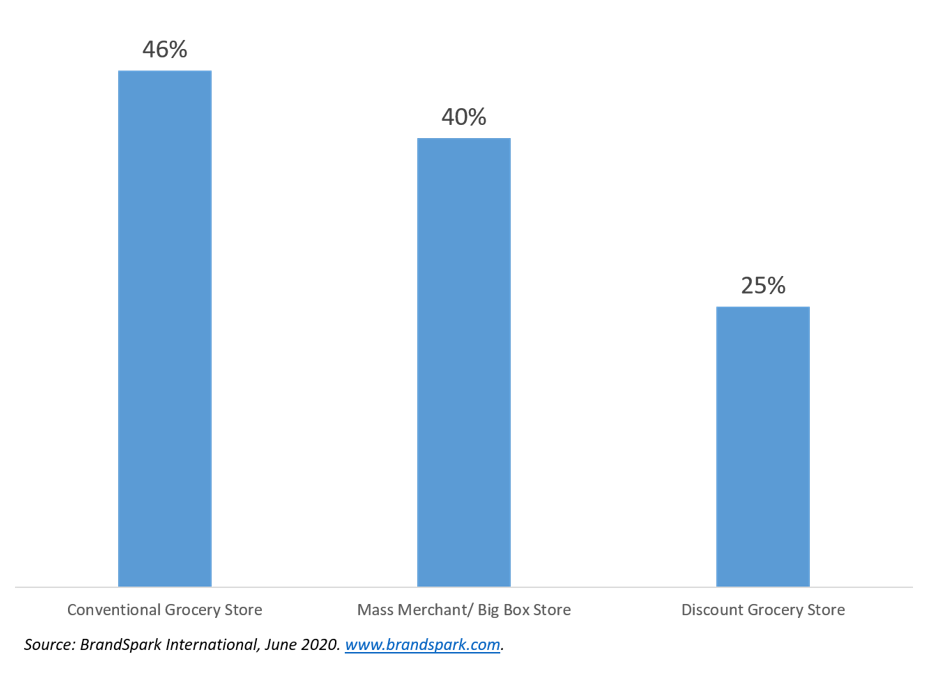 Finally, about 70% of the community says they have been cooking more at home than they did prior to COVID-19– which naturally increases demand for groceries in general.  Of this group, not only do over half expect it to continue once the epidemic ends – another 20% expect to cook at home even more. Only 25% expect to do less cooking at home once it ends, which points towards sustained increased demand for groceries (and even more challenges for the beleaguered restaurant industry).

Now these attitudes can of course change over time for some – particularly in relation to cooking at home. It’s the type of “virtuous” activity that many people have long aspired to do more of, but the convenience of other options (like restaurant and ready-to-eat meals) becomes more attractive when time pressures really hit. And it’s quite possible that 3 months into an ongoing lockdown that’s kept people out of restaurants, it’s become more challenging to remember just how enjoyable a great restaurant dining experience can be.

That said, a large segment of workers are going through a structural shift that’s pointing towards “working from home” becoming the new reality – at least part of the time. Naturally, this means creating more time to cook when one would have previously been commuting. And once accustomed to the convenience of online grocery shopping (particularly as logistics support catches up to demand), it’s easy to see why that behavior will likely sustain (and expand) over time. Such changes were things CPG marketers were likely to deal with at some point this decade anyway – now they just have to adapt that much quicker, particularly in areas like effectively launching new products online.